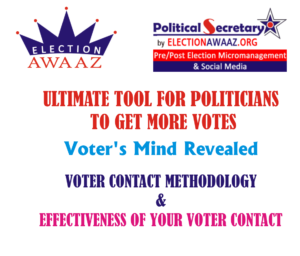 It is important to remember that you can often use different resources and different methods to accomplish the same objective. Suppose you decide that you need to persuade 10,000 voters to vote for you. One thousand reliable volunteers can go door to door tomorrow and persuade 10 voters each to vote for your candidate (no time, no money but lots of people). By yourself, you can personally talk to 10,000 voters, at 50 voters a day over the next 200 days (no money, no people but lots of time). Or you can contact all 10,000 tomorrow without any help by airing a great television commercial. It will cost you a lot of money (no people, no time but money).

Now that you have a clear, concise and effective message, it is important to use that message to persuade your target group of voters that your candidate is the best choice. Voters need to know what your message is and they need to hear it many times for it to register with them. You must repeatedly communicate a persuasive message to people who will vote.

Finally, as the election period draws to a close, there comes a time when you can no longer persuade voters and your efforts should be spent on making sure that those people who support your candidate turnout to vote for your candidate.

In order to do this, you must have some way of identifying who supports you and who has been persuaded through your voter contact effort to support you. Well before Election Day you must have spent time identifying your supporters. It is also important to know how you will reach them in a very short period of time.

Most of your campaign effort will go toward persuading your target voters that you are the best candidate and it is in their interest to go to the polls and vote for you. Everything you have done up to this point – all the research, setting the goal, targeting the audience and developing a persuasive message – has brought you to this point. Now you need to decide what is the easiest way for you to communicate with this large group of people and convince them to vote for you. There is no point in having a great message if the voters do not know about it.

People are often persuaded when they hear the same thing from many different sources. If they hear that you are a good candidate from a respected civic organization, meet the candidate going door to door, see some persuasive campaign literature, and read a favorable article in the newspaper, than they will more likely remember the candidate and more likely vote for that candidate. None of these contacts should be left to chance. A well organized campaign will make sure that all of these contacts happen and that the same message is delivered each time so that the message reinforces itself each time.

GET OUT THE VOTE

It does no good to have spent months persuading your target audience that you are the best candidate if they do not go to the polls on Election Day and vote for you. Individual voters often feel that their one single vote does not matter. They need to know that they are part of something bigger and that their support for your candidate is important. Often a simple reminder – either a phone call or piece of literature – can be enough to ensure that they vote.

The “get out the vote” (GOTV) effort is often viewed as a separate phase of the campaign. In fact, it should be viewed as the final phase toward which everything else in the campaign builds. If you compare a political campaign to a business selling a product, in this case selling the candidate to the voters, then Election Day is the only day in which you can make the sale. It is important that the voters be motivated enough to “buy your product” on that one day. The deadline for all the campaign and particularly the GOTV part of the campaign is the close of the polls on Election Day. Either you are prepared to make that final push or you are not. There are no second chances. This GOTV effort can be accomplished in many different ways but the various methods differ in one important factor – whether or not the campaign knows who is being contacted.

In areas where a candidate has considerable support – say six out of every ten voters will vote for them – it is not necessary to identify supporters. You will know that the more voters you remind about Election Day and make sure that they vote that your candidate will receive the majority of the votes. In these areas you can organize what is called a “blind pull” of voters or pulling everyone to the polls regardless of whether or not you know whom they are supporting. In these areas where the support is very strong the campaign can put up signs reminding voters about Election Day and encouraging them to vote. They may want to phone as many of the voters as possible to make sure they turn out.

In other areas where support is less sure, you will want to only remind those voters you know support you. It is therefore important to have spent time identifying which voters will support you well in advance of the GOTV effort. Once you have developed a database or list of supporters, it is important to have the resources and the means of communicating with them in the short period of time just before the election. It is therefore important to budget enough time, money and people and have a realistic plan of how you will get in touch with your supporters.

Because so much of the GOTV effort relies on having an accurate list of supporters well in advance of Election Day, it is important to know how you will identify supporters starting early in the campaign. You need to spend resources persuading your voters. However, if you only communicate with them, you are relying on them to go to the polls on their own. This can be a gamble that you need not take. You can increase your chances if you know who has been convinced and you have the ability to get them to the polls.

It is often possible to find out which candidate voters support just by asking them. People generally like to be asked their opinion and are willing to tell you what they are thinking. Develop a simple “1- 2-3” scale so that a confirmed supporter is labeled a “1,” an undecided voter is a “2,” and a supporter of an opponent is a “3.” As your campaign communicates with voters, try to judge their level of support. You will want to spend most of your resources on number “2” voters in your target audience.

As you identify voters, you will want to have some method of keeping track of them and their levels of support. You can use a simple card file or even better, a computer database that you will be able to continuously update and sort the files to meet your needs.

It is important that this database be as accurate as possible. Do not consider someone a supporter unless they have told you so directly. Often people will not want to offend you or argue with you if they have not made up their mind or actually support your opponent. For this reason you may not want to bias them by telling them you are calling from the campaign.

TYPES OF VOTER CONTACT ACTIVITIES
With all of these things in mind, it is important to ask the following questions as you consider the
various types of voters contact.
1. How much does it cost in time, money and people?
2. Do you know what voters are being reached?
3. Are they being persuaded?
4. Can you find out if they support your candidate and make sure that they vote for your candidate?
Each of the following types of voter contact meets these various criteria to varying degrees.

A literature drop is when volunteers go door-to-door leaving a piece of literature about the candidate at each household. A large number of volunteers can cover a large area relatively quickly and, because you know that the houses are in the voting district, you know that only potential voters are being reached. The volunteers are not talking with voters, so they do not identify supporters, but they can leave a reminder to vote at the supporters’ homes just before Election Day.

Your campaign can also hand out literature wherever people gather in large numbers. This could be at markets, factory gates, train stations, metro stops, etc. While this may be a lot easier or quicker than the literature drop at the voters’ homes, it is less targeted because you are not certain that the people who take your literature live in the district or can vote for your candidate. Often this type of activity is targeted around a particular issue that will concern those gathered in that area. For example, you may want to hand out a piece of literature about saving a factory at the gates of the factory, or repairing the metro at a metro stop, or building a new senior center where seniors are gathered.

Sending campaign literature to voters through the mail can be very effective at delivering your message and persuading them to vote for you. Depending on what type of list you have, you may be able to target voters either by geography or demographics (age, gender, etc.). For example, you could send something outlining your stand on one issue to senior citizens and send a different piece outlining your stand on a different issue to young women. Again, you will know that those who receive your mail live in the district.

One of the most effective ways to persuade voters is to go from house to house, apartment to apartment, door to door, talking to individual voters one at a time. You are able to hear the problems they face, tailor your message to meet their individual concerns and gage the level of support. Often voters are impressed that a candidate would bother to come meet them and you can gain their support just by making the effort.

WHAT ARE THE POWERS AND FUNCTIONS THAT THE ELECTION COMMISSION OF INDIA POSSESS?

How Many types of Voters? 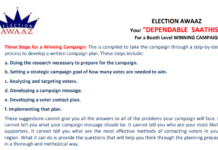